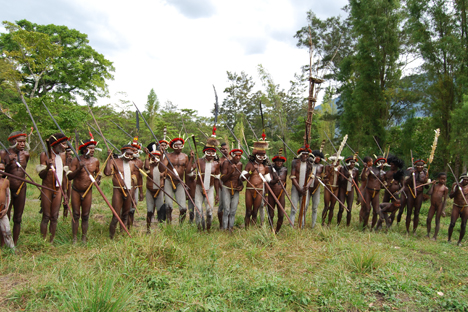 Papua is the land and a tribe of a promising mission. The land is huge and rich in its natural resources, ecological biodiversity and multi tribal indigenous people. Papua’s land area is approximately 420,000 kms.

Comprising of 21% of the total area of Indonesia, 1.904.569 sq. kms and having 4 million population. The national language is Bahasa Indonesia. However, there are about 350 tribal languages. The inhospitable, rugged terrain isolates tribal communities. Major cities lay on the lowland on the coastal area of the land. The cities, however, are flooded with newcomers from every corner in Indonesia as the impact of Transmigration Project of Indonesian Government. As a consequence, Papua has very quickly become more and more multiracial and multicultural.

SVD mission in Papua is in three dioceses: Archdiocese of Merauke, Diocese of Sorong-Manokwari and Diocese of Jayapura. Our confreres are working in 7 parishes, diocesan minor seminary and Diocesan Pastoral Training House.

The preaching of the Good News among the original tribes of Papua is the primary evangelization in the very real sense of the word. Very serious challenges have to be faced, for example in the parish of Waris (Jayapura diocese, which is on the border of PNG) and in the parish of Nasem in the south (Archdiocese of Merauke) which is also on the border of PNG. The challenge which we find within the population of Papua itself, among others is the myriad local languages, making it difficult to learn them. And because of that, our confreres are compelled to use the national language Bahasa Indonesia. However, without understanding the local language, we find difficulty to understand the local culture or get a feeling for the religious pulse of the natives.

The way of life as hunters-gatherers in open nature with such easiness of picking food so generously provided by Mother Nature is another challenge, especially, for education in schools. And on top of that, there is an ever greater challenge from outside, namely the new cultural invasion of migrants from Java and from all corners of the country which causes the original inhabitants to be more and more hemmed in as regard to social, political, economic and cultural aspects. Almost all of the important positions of the population are held by the migrants, who of course have better education and skills. And in the meantime the natural wealth of Papua is continually being depleted and exported. The young Papuan generation is very quick learning to use the latest gadgets, such as cell phones, iPads and so on. But, by doing so, they are making a tremendous leap from pre-literary to post literary culture. The social cultural impact of such a leap has to be carefully scrutinized in order to aid towards positive development. Preaching the Good News is being carried out in this actual context of Papua which is changing very rapidly and must be rooted in the concrete present situation.

After the Provincial Chapter 2012, the Provincial has sent 3 missionaries to Merauke, south of Papua. Then, it sent another 2 confreres to work in Waris among the indigenous people in the north of Papua. Papua is the land of multi tribes and it is right now the land of tribes in transition. It should enrich the life Indonesia as a nation. It is a sign of multicultural spirit of life that is witnessed by every SVD.