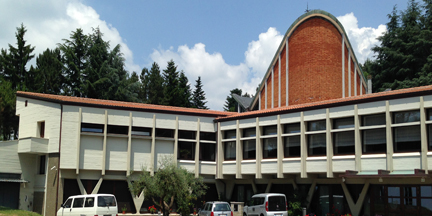 Allow me to share four stories – stories that speak for themselves without explanatory words – All of them are stories in the context of the Theme: “EMPOWERED BY THE SPIRIT – JESUS’ MISSION – OUR MISSION”

THE FIRST STORY: One of the very touching moments of the XVII SVD General Chapter 2012 for me was the Mayan Installation Rite at the end of the evening Eucharist on the election day: The leader, chosen by the people, is lead to a holy place indicated and specially prepared for by the people. The place is not isolated from the people but located in their midst. … Upon entering the holy place, as a sign of respect, the leader removes his shoes. … In a solemn moment of silence the process of intensive listening begins. – The community has chosen somebody from among themselves not because he is better than the others but because they believe that an encounter with the holy can prepare him to be their leader. … Waiting patiently the community is observing what happens when that person is put in contact with the holy. … After the person has been accepted by the holy, the people are praying over their leader and then only the leader can bless and guide the people. The message is simple: The leader needs both: The encounter with the holy and the people. – When searching for new directions in their mission and before making decisions this rite could be a perpetual reminder not to do anything before having entered the holy ground first and before listening to the people.

THE SECOND STORY IS OUR TODAY’S GOSPEL: … As known it is about the beginning of Jesus’ mission: Empowered by the Spirit, Jesus is announcing his program (Luke 4:16-21) – In one phrase: “To Set the Burdened Free”(MSG) "Jesus returned to Galilee powerful in the Spirit. News that he was back spread through the countryside. He taught in their meeting places to everyone’s acclaim and pleasure. He came to Nazareth where he had been reared. As he always did on the Sabbath, he went to the meeting place. When he stood up to read, he was handed the scroll of the prophet Isaiah. Unrolling the scroll, he found the place where it was written, God’s Spirit is on me;he’s chosen me to preach the Message of good news to the poor, Sent me to announce pardon to prisoners andrecovery of sight to the blind,To set the burdened and battered free,to announce, “This is God’s year to act!” He rolled up the scroll, handed it back to the assistant, and sat down. Every eye in the place was on him, intent. Then he started in, “You’ve just heard Scripture make history. It came true just now in this place.”

THE THIRD STORY: The Spirit might lead us to do uncommon things to the dismay of others ...When we started working in Cebu’s red light districts trying to help abused minors there, one accusation followed after the other. ... How can a priest dare to enter such a dangerous and “sinful” place? People will be talking about you and also us! – Till today I find it difficult to describe in words the human made suffering of ever more young girls exploited in brothels, night clubs and many other places of similar nature. – My argument in those days that these hundreds of very young girls should not be seen first of all as sinners but as victims of human trafficking and a well organized crime did not satisfy my critics. Even quoting a known argument of Jesus himself that it is rather “the sick who need the doctor than those who are healthy” seemed not to be convincing. Only after the first victims were rescued and rehabilitated in special care programs we had organized, the eyes of former opponents were opened. What broke the ice were victims speaking for themselves about massive abuses they had suffered while inside the sex trade and what a difference missionaries in the red light districts had made in their lives.

A FOURTH AND FINAL STORY: is again about making a difference in another person’s life –We know from the Gospels that Jesus did this many times … This happened at Caritas charity mensa in Rome last year ... Asking the old man in front of me where he lives, he does not want to answer my question. He would like to know where I live. … I tell him that I am living in Via dei Verbiti close to the Piramide and the Statione Ostiense. … The conversation takes an unpredicted turn … Instead of telling me where he lives he starts to share his story: “I know your house,” he tells me. "Many years ago, sometime in September 1963, I was there. I was in dire need of help in order to go home, visit my dying father and also to look for work. I rang the doorbell and contrary to my expectations I was allowed to enter. I asked for the director of the house. … He listened to me intensively, believed me, gave me the needed money for the fare and even brought me to the train station. … I reached home in time, met my father before he died, found work, stayed there for a number of years and started a family. … Things turned out badly after my wife died in an accident … Once upon a sudden I was left alone and saw no other way but to go back to Rome … Here I am … living on the sidewalks and eating in the Caritas mensa charity meals …" Some 78 years old, sickly and downtrodden, he knows that he does not have much time … time, however, he wants to use wisely … Thanking people he met along the way and who were of great help to him is part of that … This he mentions several times not only during our conversation but also when I leave … “Please thank the man in your house," he says, "for trusting me. He made a difference in my life.” … Isn’t this what we are born for, to make a difference in another person’s life …? (14 February 2013) … This is what mission could be all about … “Sharing Good News among His people … Making a difference in other people’s lives.”