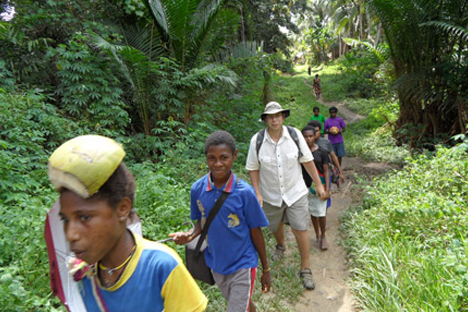 My testimony talks about a very humble man whose dedicated work and commitment to social issues has very significant impact on a large, oppressed population in the Republic of Congo. This man is Pere Silverio Maurutto SVD, the vicar of St. Amand parish in Kinshasa.

This year he celebrated his 82nd birthday, of which served in Congo for nearly 50 years. Everyone, including myself who has known him, can say that along with being a missionary and preaching the Gospel in Congo, his heart and soul is deeply involved and concerned with social improvement of people. In a specific location of the district; Mombele, many roads are intersected by the river. Thanks to various efforts and commitments, Pere Silverio and the people were able to build three bridges. He also received recognition and a prized medal from the Government for one of the bridges he built in the 1970s. But what is even greater was his desire to build bridges between people and God by restoring hope, encouragement, and faith for the future of these people.

One day, when going on his daily routines in the parish, particularly caring for the sick, a woman from the parish told Pere Silverio about a family in which the mother was in a critical condition, and at the brink of death. Pere Silverio understood that she was very serious and needed immediate attention. However, this family did not belong to the parish, nor was Catholic. He decided to take her to Pauvres de Bergamo hospital, which was run by Sisters. In the course of investigation, it turned out that this woman had AIDS and her condition was too critical to be rescued. She died soon after, leaving behind several children. It turns out, that this family belonged to a sect in the district of Mombele, where in many instances, people laugh at the efforts of the Catholic priests and their care towards people with hopeless cases. The responsible persons of this sect were well aware of this woman’s conditions, and did not do anything to help. After the funeral, the sisters of this woman returned to the Catholic Church and faith, by publicly proclaiming the faith. Ever since they faithfully attend a small church in the region of CevbElikya.

This is just one of the many stories that gives examples of how a sensitive and compassionate response to the suffering of another human being can inspire to change the hearts of people. This also shows that dedication to improving health and saving lives becomes a source of grace and truth which is a powerful means of conversation and faith.