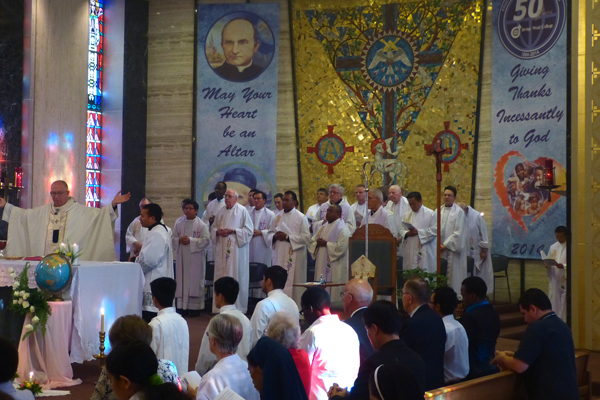 What’s the best time to plant a tree?

Twenty-years ago, according to Provincial Fr. Tom Ascheman, SVD, of the Chicago Province, who said that the second best day is…today!

“What’s the best time to start a college?” Fr. Ascheman then asked the crowd that gathered to celebrate Family Feast at Divine Word College, Epworth, Iowa. “Fifty years ago!”

Connecting to the local church, the college was also honored to welcome Most Reverend Michael Jackels, archbishop of Dubuque who served as presider and homilist at the Mass prior to the banquet.

Jackels recounted a lesson he learned while working in Rome years ago, during a time when he was missing the familiar food, friendships and culture of home. While walking on a well-worn path one day, he noticed that while its surface was hard and packed, small plants were still able to grow there. Nature requires living things to adapt to changing conditions, to either absorb what the surrounding environment has to offer…or die.

“This applies not only to the world of nature outside, but to society, to people, to spiritual life and to the growth of an individual soul,” he said. “This rule of nature applies as well to an institution like Divine Word College. Just consider the history not only of this present institution but this property over the past 50 years and longer.”

The SVD was founded by Saint Arnold Janssen in 1875, and its first missionary came to the U.S. in 1895. A German order, the society sought support among German-Catholic immigrants to the U.S. Much support was found in Iowa, Wisconsin and Illinois. In the early 1900s, the SVD established its first seminary on property north of Chicago, known as Techny.

Meanwhile, the rector of a seminary in Ohio traveled to Techny in 1916 for a meeting and became a great friend of the society. In 1931, the rector, Monsignor Francis Beckman, became archbishop of Dubuque. Hearing that the SVD wanted to establish a minor—or high-school—seminary in Iowa, he suggested it purchase the site of a former Methodist seminary and military academy in the town of Epworth.

On Oct. 30, 1932, Beckman presided over the dedication Mass for St. Paul’s Mission House.

St. Paul’s became a junior college in 1949 and later a school for students from public schools who needed additional studies before entering major seminary. In the late 1950s, it was closed. Meanwhile, the SVD leadership, responding to changing trends in education, decided to build a new liberal-arts college. Epworth was chosen because of its central location in the country.

As in the past, the SVD and DWC evolved with changing times. As the only college seminary in the country dedicated to the education of Catholic missionaries, it has adapted to conditions to support its existence.

For instance, in 1975, DWC welcomed 16 Vietnamese seminarians following the fall of Saigon. That led to the development of an extensive English as a Second Language (ESL) program, which has attracted students from around the world. To offer our educational and formational resources to more students, DWC broadened its enrollment to include religious sisters, other Catholic seminarians and lay persons. In 2009, the college changed its mission statement to reflect this significant step toward sustainable enrollment.

“In 1964, there were dozens of Catholic seminaries in the U.S., today there are 13, including DWC,” said Fr. Tim Lenchak, SVD, president of DWC, at the banquet following the Mass. “We are the only one that is a mission college.”

What’s the best day to start a college? According to Fr. Ascehman, it is 50 years ago.

“What the second best day?” he asked of the banquet gathering. “Today…to be constantly making ourselves new.”