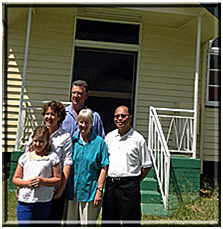 The people of Central Western Queensland are facing a tough ordeal as drought continues to threaten their livelihoods and well-being. However, Fr. Ronaldo Rodriguez says he has been heartened by the generosity of people, across the Diocese of Rockhampton and beyond, to offer a helping hand to his suffering parishioners.

Fr. Ronaldo provides pastoral care for the Catholic communities of Blackall and Tambo Parish, which fall under the Western Deanery.

Fr. Ronaldo says his parishioners and those of the whole Western Deanery of the Rockhampton Diocese are facing difficult times as rain continues to elude them. People are in crisis. There has been no substantial rain for the whole second half of last year and also this year, apart from one time in the fall. It was hell in summer for the farmers and the rural workers. But Fr. Ronaldo says the church communities across the diocese have sought to reach out to those suffering, both in prayer and in practical support.

Under the leadership of Longreach parish priest Fr. Matthew Moloney, a local appeal is underway, and across the diocese, an extra collection has been taken up at Mass on Sundays to support the farmers in their time of need. “The affected people are very grateful and happy we are remembering them and really looking after them,” Fr. Ronaldo says. “They feel as though they are not being forgotten”.