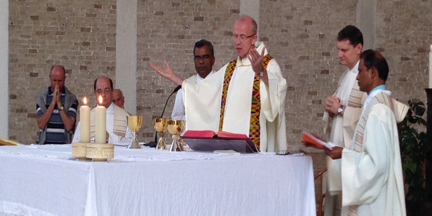 Nemi (Rome), June 22, 2014: The workshop for the new Provincials of the Society of the Divine Word (SVD) began today with the Holy Eucharist presided by Fr. Heinz Kuluke, the Superior General and concelebrated by the four Zonal Coordinators.

At the beginning of the Mass Fr. Heinz Kuluke said "let us celebrate our internationality" as he welcomed the members to the celebration and workshop.

On the Most Solemn Feast of Corpus Christi, the workshop of the new Provincials began at the Cenro Ad Gentes Chapel, Nemi. There are 36 newly appointed Provincials participating in this workshop from around the world. A total number of 79 priests and brothers including the General Council, Generalate and the Nemi staff participate in this workshop. Various administrative matters, membership and personal care would be discussed in the workshop. Discussions also will center around the five Dimensions of the Society.

During the mass the four Zonal Coordinators prayed for the marginalized, the ailing, the ones on the periphery of the society due to ethnic, societal, racial and discriminatory problems, the "wounded body of Christ" from their respective zones.

Celebrating the feast of Corpus Christi today, I recall my visits in the past months to many different countries. The thought coming to my mind quite frequently, a voice that I heard in many different places is "this is my body …"

In South-Sudan I encountered many traumatized people with hardly any smile on their faces! I asked an elderly woman, how often in her life she had to flee from ethnic conflicts and violence. Ten times the answer came. I could see the sadness in her eyes. She was sitting on the dirt ground, poorly dressed with no belongings that she could call her own. She was surrounded by numerous other refugees. Refugees and displaced people that we find increasingly in many parts of the world today. This is my body!

During the visit of the disaster areas in the Southern Philippines last December I listened to the stories of the people who lost many of their loved ones due to the killer typhoon. Nothing is left, absolutely nothing! In some cases not even hope! Suffering people due to calamities and destruction caused by nature and a consequent climate change. This is my body!

The huge prison camps in Russia, China, Vietnam, Mexico and elsewhere. It is difficult to believe that so many people have to spend their whole life in such places. Many of them not because of any crimes but for opposing the government and non- functioning ideologies. This is my body!

Rehabilitation centers for trafficked children and young women in the Philippines, Argentina and Indonesia. I know the agony and pain of these young people, street children, children in garbage dumps, mines, war zones and many other places where they just should not be. This is my body!

Visiting centers in Western countries for suicide survivors, distressed people, people who have problems with alcohol, drugs, gambling and internet addictions. Materially many of them are just fine but without meaning in life. This is my body!

The numerous overseas contract workers in so many countries with all the implications such kind of work far away from home and family brings. This is my body!

The landless farmers affected by the growing mining industry in Brazil, in Borneo and many other places. Thousands of fishing families who lost their livelihood due to reclamation projects. This is my body!

People infected with HIV/AIDS in Africa, Asia, Europe and the Americas. This is my body!

The list could go on, people, young, middle aged and old, particularly the poor and marginalized. This is my body! We know that there is something wrong with our world and that the Lord wants us Christians to get involved!

Pope Francis puts “concern for this body of Christ” at the center of his ministry and service. He repeats the words of Jesus “You give them something to eat” not just merely food but be close to the people, they themselves will tell us their real needs, “needs of body and soul”. This is what many confreres are doing around the world. This care and animation requires good leadership. That brings us together for the coming two weeks workshop here in Nemi. It is leadership for service, service to confreres, to help them better serve the people, the Lord’s body.

Pope Francis leaves no doubts when talking about the changes he envisions …“I prefer a Church which is bruised, hurting and dirty because it has been out on the streets, rather than a Church which is unhealthy from being confined and from clinging to its own security. I do not want a Church concerned with being at the centre and then ends by being caught up in a web of obsessions and procedures. More than by fear of going astray, my hope is that we will be moved by the fear of remaining shut up within structures which give us a false sense of security, within rules which make us harsh judges, within habits which make us feel safe, while at our door people are starving and Jesus does not tire of saying to us: “Give them something to eat” (Mk 6:37) (EG 49) Thisis surely also true for religious congregations including the SVD.

In several countries I also visited chapels of the adoration sisters. You know that these are special places that offer an opportunity for an encounter with the Lord in silence. The Lord as we believe is present in the Eucharist exposed for adoration. The symbol he has chosen is that of bread, easily understood by many people around the world. In some cultures, as we know, it would have been rice or some other staple food. Without bread, without rice, without staple food we cannot live. “Give us today and each day our daily bread and rice”. “This is my body!”

The Eucharist unites and brings us together as communities preparing for service to God’s people … as Paul tells the Corinthians in his first letter, “we, though many, are one body, for we all partake of the one loaf.” (10:16-17) (SVD Constitutions)

Jesus himself is this bread as the Evangelist St. John reflects in his theology "I am the living bread that came down from heaven; whoever eats this bread will live forever; and the bread that I will give is my flesh for the life of the world." (6:51-58)

Pope Francis promotes a contemplative and a missionary dimension. Being close to God’s people and close to God is a source of strength that enables us to serve. The pope writes: “To be evangelizers of souls, we need to develop a spiritual taste for being close to people’s lives and to discover that this is itself a source of greater joy. Mission is at once a passion for Jesus and a passion for his people.” (EG 268)

A story at the end. One of our confreres, Bill Burt, while celebrating mass in a public place was approached at the altar during the consecration by a young mentally challenged and drunken man who attempted to get hold of the chalice. Trying to prevent him doing so, Bill grabbed his hand. Holding the host in one hand and the man’s hand in the other, Bill said the consecration words, “This is my body.” People approached him after the mass and pointed out to him the unique message! Many things in the Church and religious life will change if we rediscover the Lord’s presence in our world in these two forms … It also will change the way we as leaders plan and serve. I wish all of us a fruitful workshop and a Blessed Celebration of Corpus Christi!