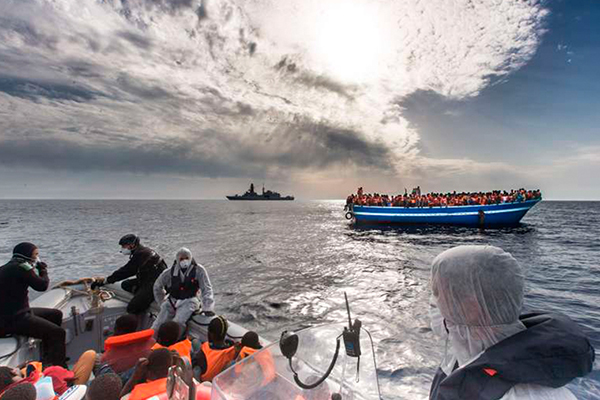 SOS: the Italian navy helps a boatload of people trying to reach Europe from North Africa. Some 165,000 people have made the crossing so far this year compared to 60,000 for all of 2013. Hundreds have died trying to reach Europe.
ROME, Italy, October 2 (UNHCR) – The UN refugee agency reported on Thursday that new data on irregular crossings of the Mediterranean in the third quarter of the year show an alarming increase in the numbers of people perishing while attempting to make the journey to Europe.
A UNHCR statement said that the numbers were up substantially in both absolute and percentage terms. "In all, 90,000 people crossed to Europe between July 1 and September 30 and at least 2,200 lost their lives, compared to 75,000 people and 800 deaths for the period between January 1 and June 30. In other words, a person making the journey in the first half of the year faced a 1.06 per cent chance of losing their life, while the odds for someone crossing in the third quarter more than doubled to 2.4 per cent," the refugee agency said.
In all, 165,000 people have made the crossing so far this year compared to 60,000 for all of 2013 – making 2014 a record year and reflecting the level of desperation among many of those involved.
UNHCR said that, in light of the dangers, it was reiterating its call for Europe to commit more resources for rescue at sea in the Mediterranean and step up efforts to provide legal alternatives to dangerous voyages. "The collective response needs to maintain a strong capacity to rescue people at sea and increase safer ways for refugees to find safety in Europe. If Europe fails in these efforts, many more lives will continue to be lost, and incidents such as the disasters off Lampedusa a year ago this week will become more common," it added.
"We are failing to heed the lessons from the terrible events of last October, and more and more refugees are drowning trying to reach safety. EU [European Union] countries must work together to continue and bolster the vital task – which has been mostly carried out by Italy's Mare Nostrum operation, but also by commercial vessels – of rescuing people at sea," said UN High Commissioner for Refugees António Guterres.
While the full reasons for this year's increases both in crossings and deaths are not known, a number of factors appear to be involved. One is the situation in Libya, from where many of those making the crossing depart. There, insecurity has hit vulnerable groups, such as asylum-seekers and migrants from sub-Saharan Africa or the Middle East, hard – prompting many to flee.
"Libya must play its part in ensuring respect for the principles of human rights and international law, because weak law enforcement is allowing people smuggling networks to prosper," the UNHCR statement said. Also apparent is that boats and dinghies are often more crowded, with cases of people dying of asphyxiation aboard boats or travelling without life-jackets.
Last month's tragedy off Malta, in which as many as 500 people were killed when their boat was reportedly sunk by smugglers, left only 11 survivors. Those few that survived spent days in the water watching helplessly as family members and friends perished.
UNHCR said that although not all of the people making the journey to Europe are looking for asylum, the third quarter data show that the proportion fleeing war or persecution in their countries is growing. Asylum-seekers from two such countries, Syria and Eritrea, have accounted for almost half of those making the crossing since July 1. While this is a fraction only of the global refugee total (some 16.7 million people worldwide, overwhelmingly hosted by countries bordering war zones), it nonetheless represents growth in the refugee caseload.
Many of those making the crossing have no legal or safe way of reaching Europe. "Alternatives must be urgently found to protect people from the risks of travelling with smugglers," the UNHCR statement said, adding that these could include increased resettlement quotas and access to humanitarian visas for people fleeing war and persecution, as well as joint border management policies involving the EU and North African countries that not only look at border security but also have a clear human rights/refugee component.
UNHCR is also calling on European governments to do more to facilitate family reunification. In addition, states could establish private sponsorship schemes and use programmes such as student or employment visas to benefit refugees. "We have to find better ways of allowing these desperate people to find a place of safety. They have gone through dangers and horrific experiences which many of us can only try to imagine," said Guterres.
These challenges cannot be addressed by a few states alone; a joint European response is needed, based on collaboration among states and EU support to ensure additional initial reception facilities, assistance in processing as well as identifying solutions for those in need of international protection.
A UNHCR report "So close, yet so far from safety", is available at http://www.unhcr.org/542c07e39.html