"Today, South Sudanese refugees in Uganda exceed one million. They are houses in different refugee settlements. Most of the refugees are still in shock. They still remember horrible scenarios they have experienced: they speak of barbaric violence, with armed groups reportedly burning down houses with civilians inside, relatives being killed in front of family members, sexual assaults of women, and kidnapping of boys for forced recruitment."

STORIES OF REFUGEES IN SPAIN

Since the social Media started informing the rest of the world about the situation of Syrian refugees, and of the measures being taken by the European Union to receive them, a lot of stories have been published. Who are the main protagonists? children, youth, adults and aged who fled certain death in a war-torn country.

Vivat International, Spain has come to know the story of a Syrian family made up of a father, a mother and four children. They have asked us to protect their identity and for that reason, we will not publish their names here. They are Syrian refugees received by the Spanish state, and have been living for the past five months in the neighbourhood of San Cristóbal in Madrid, in a house rented and paid for by ACNUR for six months, of which five have already gone by. Whiles we think of what will happen when the aid ends, (where will they live?), they narrate the events surrounding their escape from Syria.

"Our story is the same as that of many more from my country, those who fled in order to avoid death. It took us three years and two months to make our getaway. The bombs destroyed our house, our little son who was only thirty days old, died in the bombings, together with other family relations: my father, my brother and my father in-law. We lived underground in terror, with neither food nor drink, forcing the men to venture outside during the nights into the fields to collect leaves, fruits or animals, be it a dog or a cat, anything edible for the sake of survival", recounts the refugee.

The man narrates that in the midst of so much anguish, one day hope arrived when after waiting for so long, he managed to flee with his family into Jordan, in the night, with nothing, his wife pregnant and tired, asked him to go on without her for she could no longer continue. However, clutching her by the waist and with the children in tow, they managed to finish the journey. It took them twenty days, hiding during the day and walking during the night to avoid capture.
Living crammed up in a small tent, without basic amenities and without medical assistance, the father of this "fugitive family" was forced to venture into the streets in search of sustenance for his wife and kids, but he was grabbed by the army and was maltreated and once again, despair invaded his improvised home. Light, however showed bright at the end of the tunnel, when they came into contact with ACCEM, an NGO dedicated to bettering the conditions of living of refugees, migrants and people living in precarious situations or in danger of social exclusion. The NGO explained to them the possibility of coming to Spain as refugees.

They did not think twice about it and decided immediately to accept the proposal, which through the help of ACNUR, they were able to realize, backed by the Spanish Embassy's organization of the journey, processing their passports and required documentations, until finally, five months later, they were brought to Madrid aboard a plane.

Refugees today
They lived for nine months in a refuge for refugee foreigners, their room measuring only 25m2. Now, their principal objective is to find work and live independently. Their rent will be paid for only one more month and after that, they don't know what will happen next. Meanwhile, they continue to receive help from Caritas where the wife is taking a course in literacy for immigrants.

In light of all this, one would think they would fall back into despair, but they assure us that they are contented and thankful because their children are in school and are well received. However, they have a message for those who wield the power to decide on their situation and that of other migrants and refugees in the world: "Let the borders be opened, and may justice be applied equally for all".By: Vivat International España 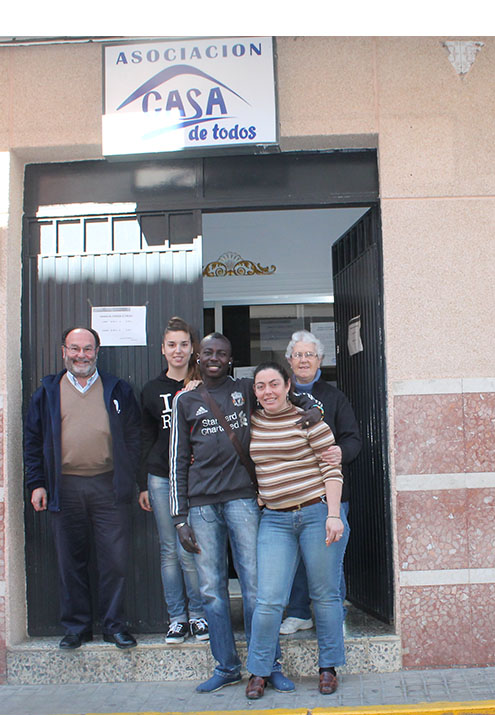 The immigrants form part of the daily panorama of our cities, estates and Churches. In the faces of the immigrants we contemplate the image of Christ who said: “I was a stranger, and you welcomed me” (Mt 2: 35).

The recent events in the news make us see the migratory phenomenon like an inevitable drama for many people that don’t have any alternative. Melilla (Spain) is almost an evident tragedy. In recent months, hundreds of immigrants have attempted to storm the 6m-high border fence. It is the major attempt registered until now.

Melilla is only a tip of the iceberg to know that there are a lot of stories behind the people who come from other countries and cultures, seeking to survive or give a better future to their families from a far.

Despite their illegal situation, the immigrant is a human being, created and loved by God. Therefore, he has his dignity and rights. Crossing borders to look for a better life, the immigrant leaves behind a family, relatives, friends, etc. The new hard situation makes him begin life all over again; look for a job and integrate himself into a new society, different from his. It is something not always simple, but possible, thanks to the work of many non-governmental organizations, associations, Caritas and religious congregations. The congregation of The Divine Word Missionaries is one of them.

Father Marcel Kakrabah-Quarshie, a Ghanaian Divine Word missionary, started two years ago with a group of 10 south-Saharan immigrants in the parish of Our Lady of Carmen in the estate of Su Eminencia in Sevilla. Today, the group has hundreds of immigrants, originating from Nigeria and Ghana. In the beginning, they were meeting on Saturdays to celebrate the Holy Eucharist in English. After the mass, they meet in the parish hall, where they take some refreshments and share their joys and sorrows.

“It is the only moment of the week that I experience interior peace. I forget the daily sufferings and struggles. The time in the mass celebrated by Fr. Marcel and later the sharing with the other brothers who live in the same situation like me, give me back hope”, confesses one of the immigrants.

Slowly by slowly, the group has been expanding and more than the service offered in the parish, there is the Association Casa de todos (the House of All). This is an initiative by three congregations, among which is the congregation of the Divine Word. In this association, they offer training for both Spanish and immigrants’ families in risk of social exclusion. Spanish language courses, psychological attendance and job advice, are among the many areas of service they have. In doing this, there is participation and assistance of qualified personnel and of course a good number of volunteers.